In line with both the longstanding responsibilities of the Feoffees and the Charity and to fulfil the objectives of our schedule with the Charities Commission our present charitable work consists of two main areas;

Support for the poor and needy throughout Rotherham and

Provision of Educational Scholarships and Bursaries

Support for the poor and needy

This provision manifests itself in the longstanding tradition of the distribution of the Annual Doles. This tradition originated from the very start of the Feoffees in the 14th century. Over the intervening years this has evolved into the distribution of a cash gift to recipients each December at a ceremony which now tends to be held in All Saints’ Church, Rotherham Minster. Recipients of the Doles vary in age but the basic premise for receiving a gift is to help those who are poor or in need.

The Feoffees also work with some of the local voluntary sector Charitable organisations and the All Saints’ Churchwardens to help identify suitable recipients. Details of eligibility for receipt of the Doles can be obtained through the ‘contact us’ section of this website or alternatively via the Churchwardens at Rotherham Minster. 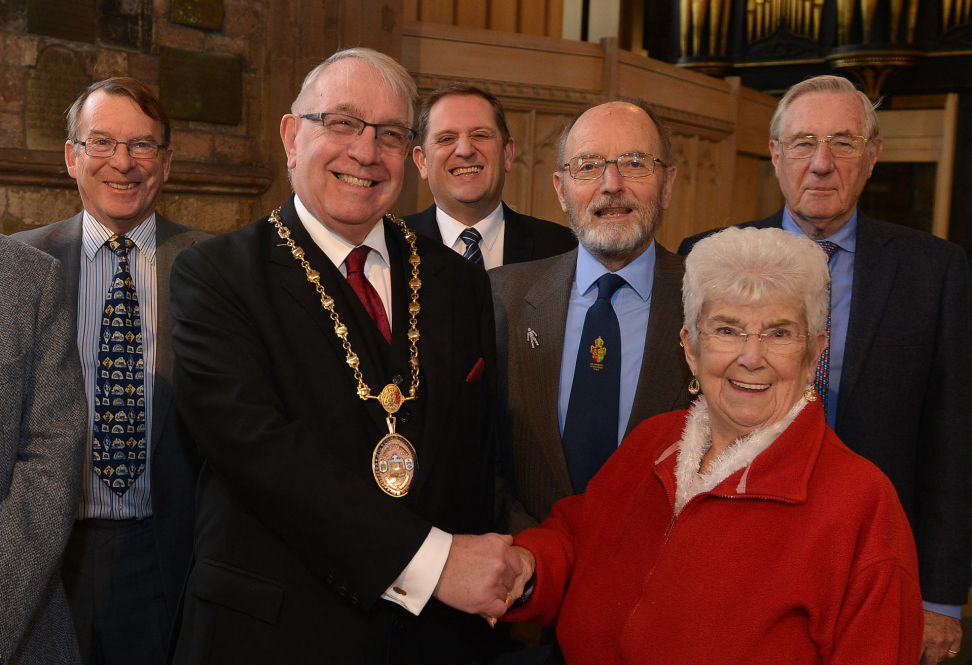 Provision of Educational Scholarships and Bursariers

Over the past 15 years The Feoffees have initiated investments whose income is used directly for providing scholarships and Bursaries. At the moment there are three different awards but it is one of the Charity’s objectives to increase the amount of money raised in this area and thereby increase both the number and value of these offerings for the benefit of the young people in Rotherham. More detail of the three existing awards are given hereunder.

The Feoffees of The Common Lands of Rotherham have identified the recipients of their scholarships for 2020 and the awards, to Cora Lancashire and Hannah Jones, were made recently, immediately before the two winners went away to start their University studies.

The Feoffees Scholarship was awarded to Cora Lancashire, who will be studying History at the University of York. Cora was unaware of this scholarship but, thanks to her Grandma, and an article in The Rotherham Advertiser, informing A level students in all Rotherham Sixth Forms of its availability, she was encouraged to apply and as a result she was adjudged the most suitable applicant this year. Cora lives in Rotherham and her secondary education was at Oakwood School and then Thomas Rotherham College.

Cora is pictured below (left), receiving her award and certificate from one of the Feoffees, John Bingham, who was standing in for this year’s Greave of The Feoffees, Jeremy Mason. 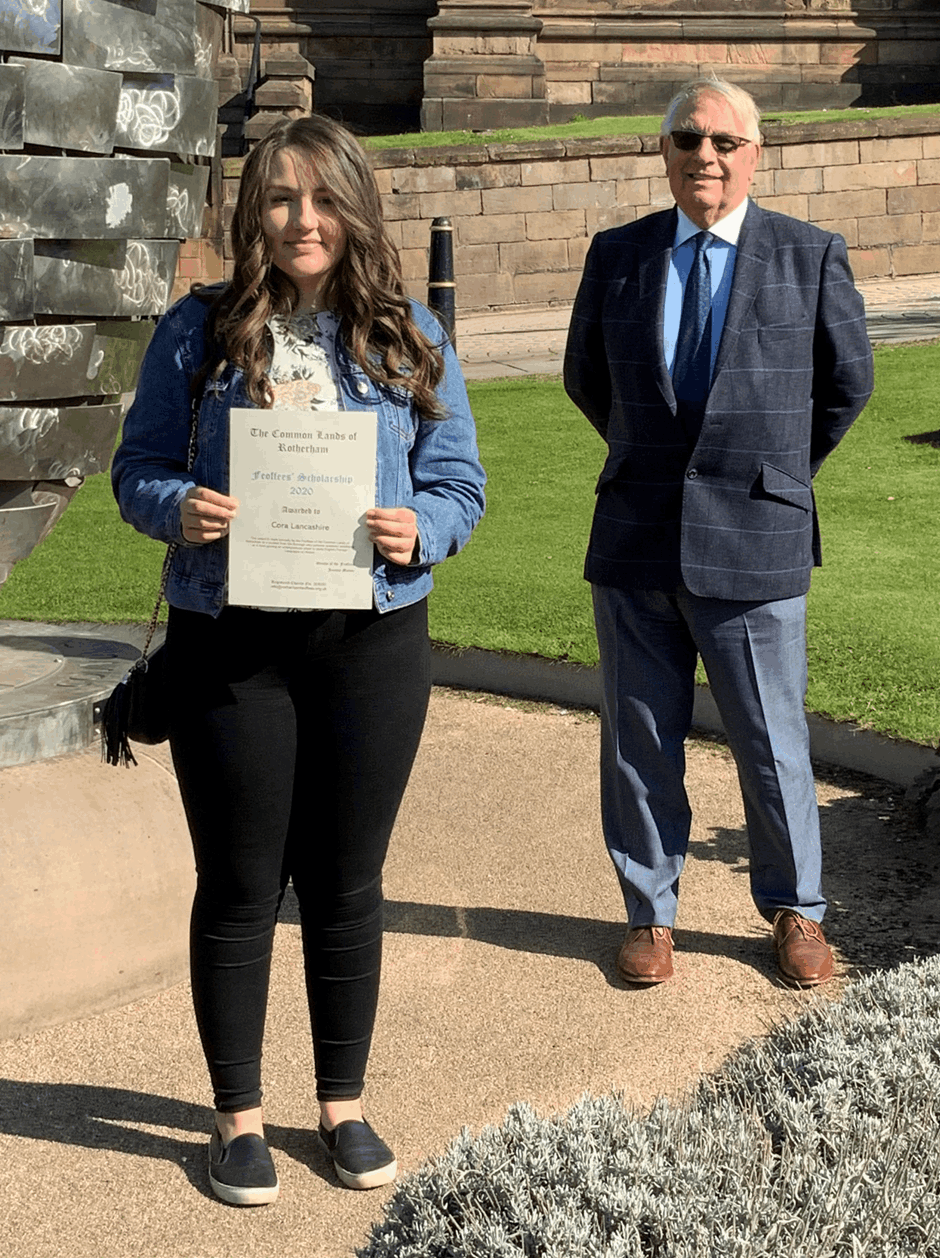 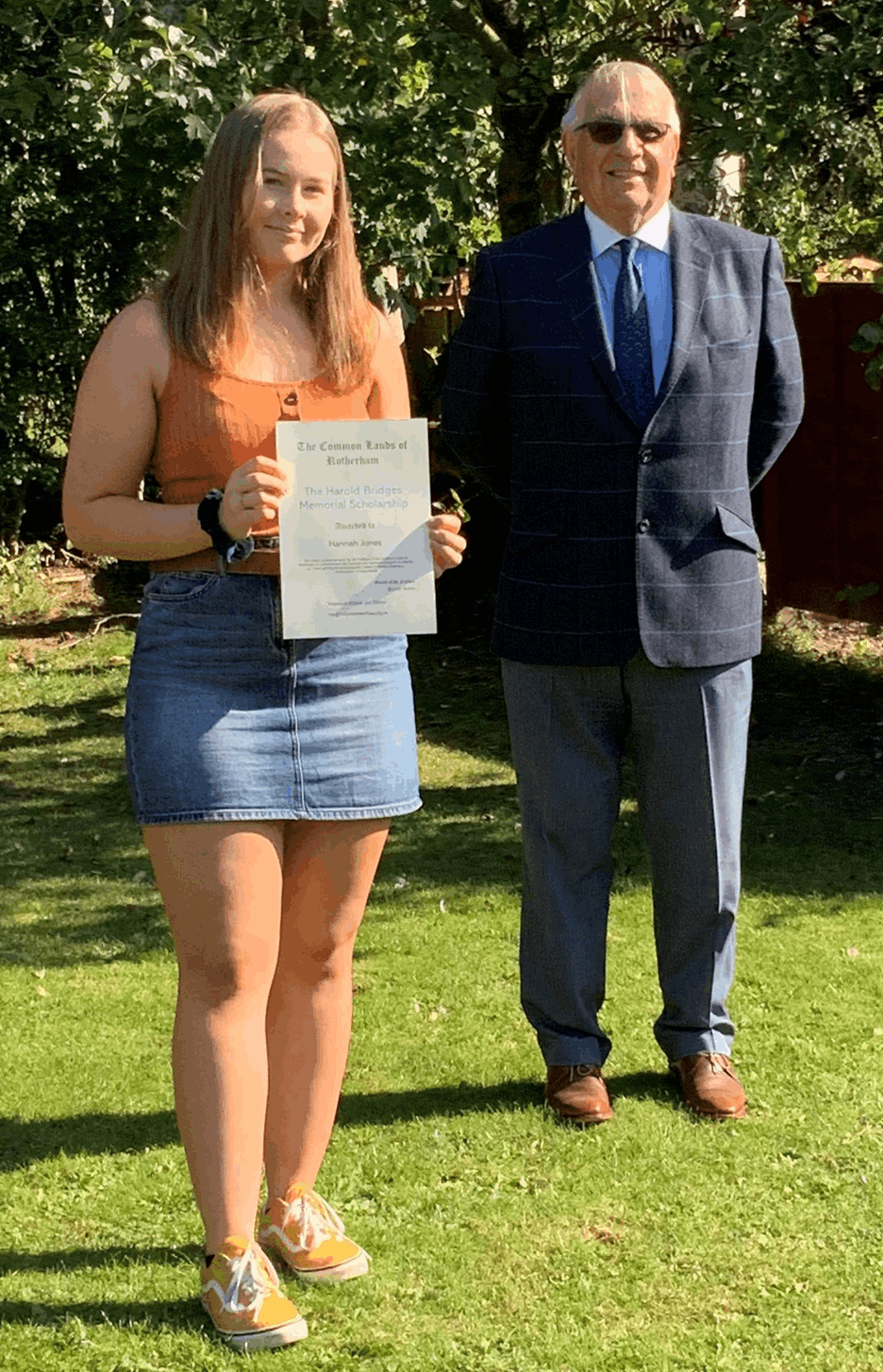 The Bridges Scholarship recipient is Hannah Jones, who lives in Todwick, and has completed her secondary and A level education at Wales High School. She is pictured above (right), receiving her certificate and award. Hannah will be studying Physics at Collingwood College at the University of Durham and she was strongly supported in her application by her teachers at Wales High School. The Bridges Scholarship is awarded in memory of Harold Bridges, who hailed from Thurcroft and also studied at the University of Durham in the 1930’s. Harold Bridges eventually became CEO of Shell USA.

Both Cora and Hannah said that because of the national situation, their last year as sixth formers had been very different and somewhat tricky, but in each case the application and hard work that they had put in had resulted in justifiable rewards exemplified by the excellent results they had attained, and the award of the scholarships, of £1,000 each, could be said to be the icing on the cake.

Harold Bridges was a very distinguished Old Boy of Rotherham Grammar School. He was awarded a scholarship to attend the Grammar School and from there, in 1934, he won a scholarship to Armstrong College, Durham; a constituent College of the University of Durham. At Durham he studied Physics, Chemistry and Mathematics and won the Stroud Laboratory Prize for Physics. Harold then had a long and successful career with Shell and rose to become CEO/President of Shell Canada, part of the Shell global empire. After this position in Canada Harold became the CEO/President of Shell USA; a position he then held until his retirement. Harold’s widow, the late Mrs Shirley Bridges was a generous benefactor of Thomas Rotherham College in the 1990’s as a result of which a scholarship was set up in his honour.

This scholarship is managed and awarded by the Feoffees of The Common Lands of Rotherham and is valued at £1000. It is given to a second year sixth form student about to enter the first year of their degree course at university and who intends to follow a course in Physics, Chemistry, Mathematics or Engineering (but not Computing or Computer Engineering.) or a joint degree comprising a combination of these subjects. 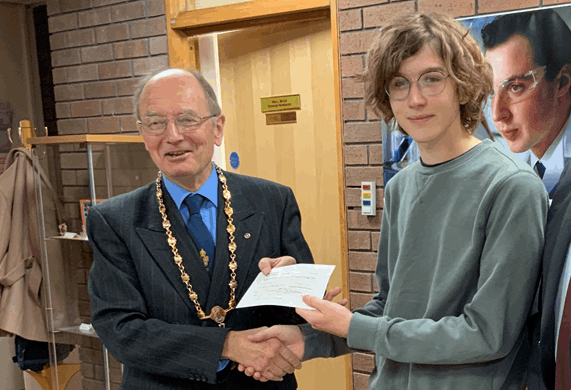 After the reformation The Feoffeesy played a critical financial role in supporting Rotherham Grammar School and had always been represented on its Governing Body. After the Grammar School and Rotherham High School were abolished in 1966 Feoffee representatives were appointed to the Governing body of Thomas Rotherham College. At the incorporation of TRC in 1992 four Feoffees were required by Statute to be members of the TRC Governing Body. This situation continued until TRC moved back into the state-controlled schools sector in 2017.

One area in which the Feoffees continue to support education is by giving money through the award of scholarships to sixth form students educated in RMBC and about to enter university.The Feoffees’ Scholarship is valued at £1,000 and awarded to a second year sixth form student about to enter the first year of their degree course at university and who intends to undertake a course in English, Foreign Languages or History or a joint degree comprising a combination of these subjects. 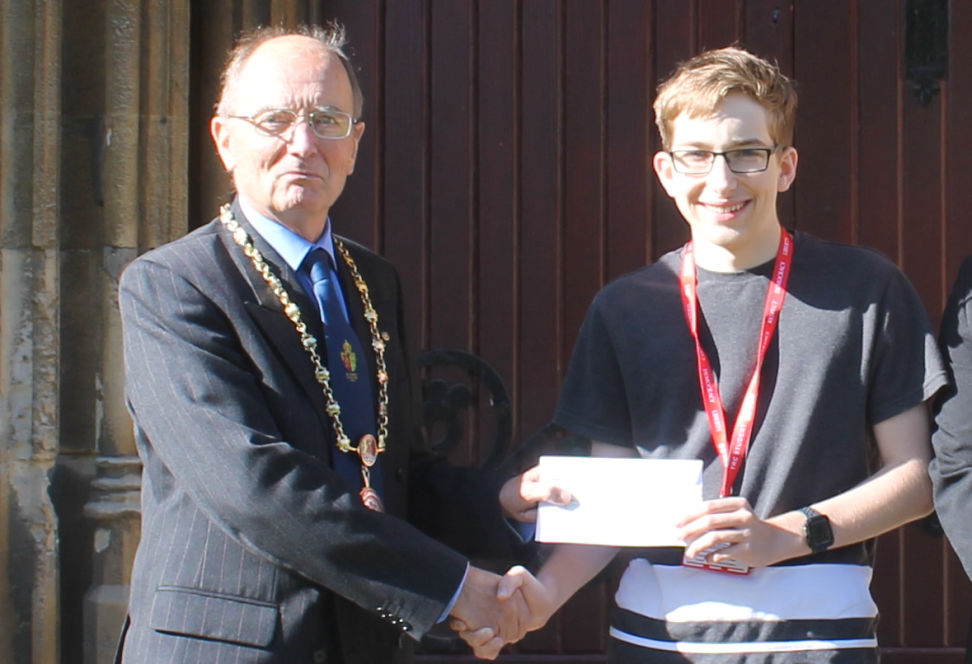 Rudston Preparatory school was an independent School in Rotherham for children up to the age of 11. It was established in 1948 and closed in 2015. It was organised as a Charitable Trust and when it closed its trustees decided to donate a sum of money from that which remained (after all of the costs had been cleared) to Rotherham’s oldest charity; The Common Lands of Rotherham, the Trustees of which are the Feoffees. It is the Feoffees responsibility to decide how best to administer this donation. The first Bursary was awarded at the end of the 2018/2019 academic year.

It has been agreed with the former Rudston Trustees that their donation should be put to use as a bursary, to be awarded annually, to a newly qualified teacher, (NQT), taking up their first position as a primary (3-7 or 5-11) teacher in a school in the area covered by Rotherham Metropolitan Borough Council (RMBC). The position taken must be based on a full-time contract. Teachers working as supply, covering for ‘leaves of absence’, maternity leave or being employed for short ‘fixed terms’ will not be eligible for this bursary.

The bursary is awarded in partnership with Sheffield Hallam University (SHU) and is valued at £2,500, to be paid in three instalments commencing during the first term of the successful teacher’s first post. The second and third instalments would be paid at a similar time during the second and third years of that teachers’ career. The continued payment to cover all three years will be dependent upon the successful teacher remaining as a teacher in a RMBC primary school for the full three years covering the Bursary. The Bursary would continue if the teacher moved to another primary school as long as it was to both a full-time contracted position and the new school was still in the RMBC area.

The amount awarded each year is currently as follows:

The first two recipients of the Rudston Bursary, Megan Jones and Poppy Bowen-Green are pictured having received their awards. They are flanked by the Greave for 2019/20, Giles Bloomer and David Owen, Head of Department of Teacher Training at Sheffield Hallam University. 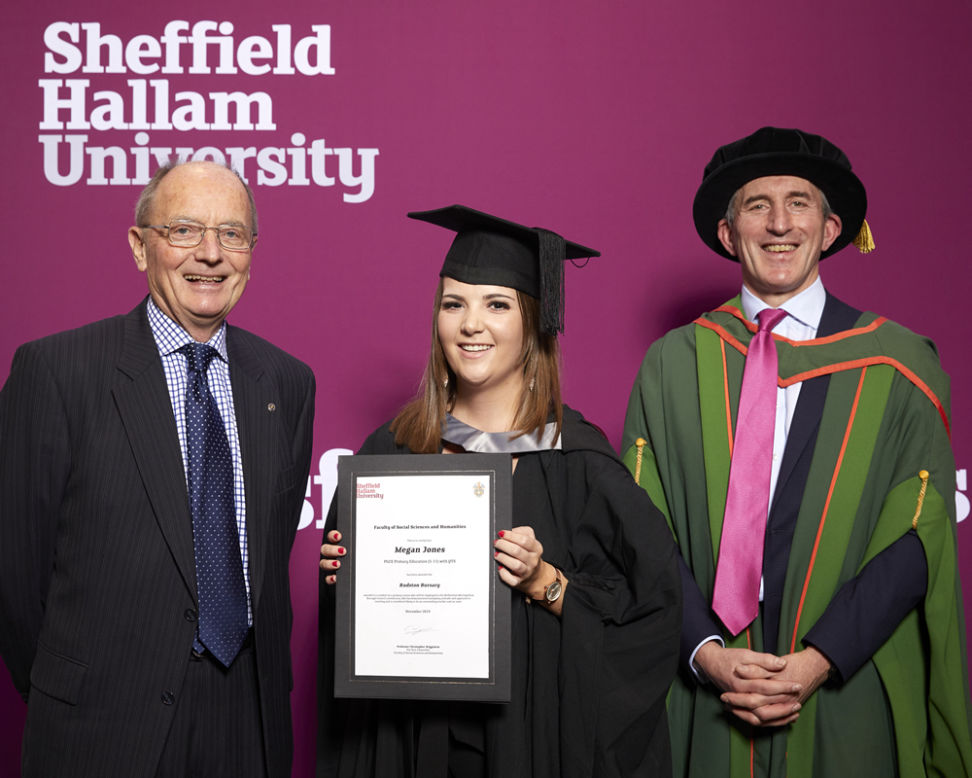 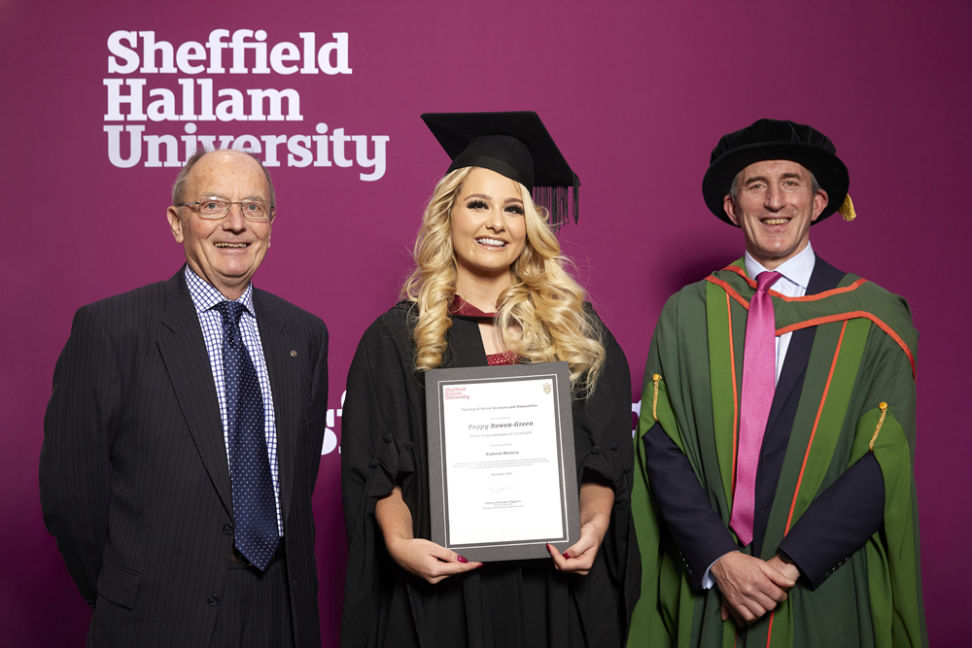 For further details and the terms and conditions of associated with each award please click on the respective links below to download a PDF copy which you can save or print.

In addition, for sixth form pupils at any of the sixth forms in the following schools please enquire of your Head of Sixth Form Studies or your Principal. The scholarships are open to any sixth form student studying at any of these schools:

With respect to the Rudston Bursary more information can be obtained from the Office of the Department of Education at Sheffield Hallam University.

"non nobis sed omnibus – not for us but for everyone"